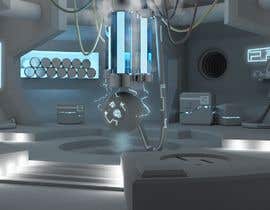 I would like help concept designing a video game map of a futuristic sci-fi underground bunker filled with numerous specific room designs. I have been working with a 3D modeler to design some of the rooms so far but need help coming up with general concept designs and styling to help tie the rooms together visually, and design the rooms that have yet to be modeled.

The theme is futuristic sci fi, almost like a spaceship but in an underground bunker. The bunker is a secret, massive facility filled with dozens of rooms each serving different purposes. Rooms like a kitchen, bedroom, movie theater, gym, generator, security room, office, nightclub, hospital, etc. The story is that someone spent years building this bunker preparing to live in it once the world ended. The bunker is full of advanced technology, almost so advanced it appears alien. Some elements that will be present are things like security doors that open and close, pin-pads for access codes, holograms showing different areas or maps, and accessible panels throughout that could be used for maintenance.

The bunker is run by a super intelligent AI computer. This computer is represented by a metal ball that looks like a robotic eyeball. This ball will fly around the bunker and dock in different locations. The ball will also speak to people and control different areas of the bunker. Some of the major elements of the story involve time travel, the AI computer getting corrupted and turning evil, the bunker getting infiltrated and going into lockdown or self-defense mode, and more.

Although this is a bunker it is not meant to feel creepy, dark, or claustrophobic. Imagine this as a bunker people would want to live in. Large in scale, clean, and full of interesting details. Some of the areas can be a little unorganized or cluttered if it adds to the realism, but preference is that the bunker feels like it was carefully designed and built within the last couple years.

The entire bunker runs on a special fuel, or energy, that can be seen in various locations throughout the bunker. This energy is represented by a mysterious blue plasma that is stored in cells (like large batteries) in the generator room. There are also clear tubes running down some of the hallways and in the rooms that show this energy inside flowing through the bunker.

The main color scheme is whites, blacks, greys, and blues. Any concepts we decide to use will be 3D modeled to be as photorealistic as possible. So the more detail we can provide in the concepts to assist with this the better.

For this contest please provide an example of a room of your choice, or whatever area you like that represents your proposed style and incorporates the elements I mentioned previously. Once a winner is chosen, I would work with them to finalize any details of their concept, and then work together to design the other rooms/areas for the project.

Each room may need to incorporate specific design elements, but I can explain those in greater detail during the project.

I have examples of the models built so far, as well as the style and details I researched and like. All of these models and details can be modified however we like to fit any concepts or styles we come up with. You can download the references here: [login to view URL]

Please submit any original concepts that you think would be a good fit and incorporates these ideas. The main goal is to design all of the areas of this bunker in a way that each room feels unique to its purpose but like they still all belong together.

Submissions do not have to match any of the examples provided and I am open to any ideas.